You are here: Home / News / Group against the Bakken pipeline disappointed in president’s executive order 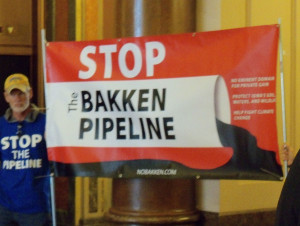 A spokesman for a group of 30 organizations which have fought the construction of the Dakota Access oil pipeline across Iowa says they are disappointed with the executive order signed by President Donald Trump that allows the project to continue.

“Can’t say it’s a big surprise, since now President Tump indicated his denial of the dangers of these pipelines for our climate and for our waters. It’s a very sad day for our environment for sure,” Magram says.
The Army Corps of Engineers had stopped construction of the Dakota Access pipeline under a lake in North Dakota, saying alternative routes needed to be considered.

The Iowa group was preparing to ask that the Environmental Impact Statement requested for North Dakota be extended to include Iowa too. That move now appears stalled by the administration’s action.

“It creates a whole new challenge for those who recognize the dangers of this pipeline,” Magram says. He says the group is not yet sure what will come next. “No, we have not of course formulated a next move,” Magram says. “That certainly will be the focus of our attention in the coming days.”

Magram says the executive order will probably be challenged in court, but he is not sure the prospects for success.”I don’t know the legalities of it, but we will certainly fight it every way that we can that is nonviolent,”Magram says. He says thousands of Iowans have worked for more than two and a half years to try and stop the pipeline and they aren’t ready to give up the fight yet.

The president’s executive order also revives the Excel Energy Pipeline which the Obama Adminstration had stopped.