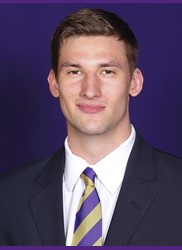 Northern Iowa has now won four in a row. Bennett Koch scored a game-high 17 points as the Panthers beat Evansville 61-54 in the McLeod Center.

“When we were losing we knew we had to change something and I think it just revolved around defense”, said Koch. “We knew this game was going to be grind and whoever could grind it out the longest was going to win and I think we did that tonight.”

Redshirt freshman Luke McDonnell added 14 points and 12 rebounds as UNI improved to 4-5 in the Missouri Valley Conference and avenged a 72-58 loss to the Aces back on New Years Day.

Panther coach Ben Jacobson says the emergence of McDonnell has been a big lift.

“He’s putting a lot of pressure on the defense”, said Jacobson. “On our defensive end he is putting pressure on the other team as well by going and blocking some shots. The activity he is playing with is really good.”

UNI will try to extend its winning streak to five games with a visit to Drake on Saturday.