You are here: Home / Agriculture / Film tries to save some of Iowa’s old barns 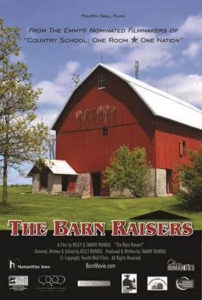 Iowa is losing about 1,000 of its historic barns every year and a new film aims to inspire people to preserve some of the barns that still stand.

Quad Cities-based filmmakers Kelly Rundle and his wife, Tammy, have created “The Barn Raisers,” which will premiere this weekend in Davenport.

“We’re taking a look at vintage Midwestern barns through the lens of architecture,” Rundle says. “What does the way the barn was built tell us about when it was built and who built it, what its purpose was and we’re also trying to get at who those builders were and they’re a little bit of a mystery in most cases.”

Besides being very practical and useful for the farmer, Rundle says barns are “magnificent and important structures” that hold the stories of America’s past.

“I think part of what led us to this particular story is my own experience growing up exploring my grandfather’s dairy barn in Wisconsin,” Rundle says. “As we traveled over the last three or four years to make the film, I was able to revisit a lot of those things I remembered as a child.” The 57-minute movie will debut on Saturday at the Putnam Museum.

“In addition to the premiere on the Putnam giant screen in Davenport, we expect there will be other showings in the region and the film will also air on PBS stations throughout the Midwest,” Rundle says, “so, we’re looking forward to sharing this film with everybody.” Rundle says he hopes this movie will be used by barn preservation organizations around the country to further their efforts.

“‘The Barn Raisers’ is a companion to our Emmy-nominated film, ‘Country School: One Room, One Nation,’ and in that film we focused on country schools in Iowa, Wisconsin and Kansas,” Rundle says. “We turned to those states for this particular project and then added also Michigan and Ohio.” The Rundles run Fourth Wall Films, based in Moline, Illinois. Dates for the movie’s airing on Iowa Public TV have not yet been announced.