You are here: Home / News / Senator Ernst speaks at March for Life in Washington, D.C. 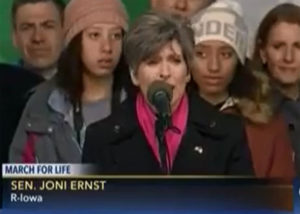 Ernst says pro-life supporters now have backing in the White House and she has plans for another bill. “I am also going to introduce a bill Monday to stop what some have referred to as President Obama’s last gift to Planned Parenthood. Title ten,” Ernst says.

Ernst says it would scrap the Obama administration’s eleventh-hour rule that entrenches federal family planning funding for Planned Parenthood. Ernst says told the crowd the pro-life community must honor the civil liberties, independence, and strength of all women. Ernst says, “And that means both supporting mothers and rising up to protect the most vulnerable in our society — the innocent babies who are unable to defend themselves.”

Ernst says the issue is important to her as mother, a grandmother, and a woman. This the 44th annual March for Life, which was started after the Supreme Court decision which legalized abortion.