You are here: Home / Agriculture / Farm families in transition depicted in play 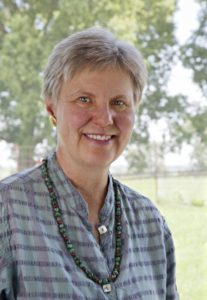 A one-person play, to be performed this weekend in western Iowa’s Cass County, portrays the struggles of farm families in transition. Iowa Poet Laureate Mary Swander wrote the play titled Map of My Kingdom. “The title for the show is taken from King Lear,” Swander says. “It’s all based on…he was going to inherit the land and how is he going to divide up his kingdom?”

The play was commissioned by Practical Farmers of Iowa. Swander says it’s a mix of stories taken from real events, ranging from humorous to horrific. “It’s about farmland transition, who will own the farm next? It can blow up a family. You can lose a family farm over this,” Swander says.

In addition to research on issues such as urban sprawl, Swander included her own experience in the play, as she inherited her parents’ farm along with her two brothers at the age of 23. She says they were “totally unprepared” for the experience.

Swander suggests a lot of farm families struggle with the transition. “There’s a vast amount of land right now in this country — equal to the amount of the Louisiana Purchase — that will be in transition over the next 10 years. So, it’s an urgent problem,” Swander says.

Lindsey Bauer of Orange City is the sole performer in the play. She recently moved back to Iowa from Chicago and says part of the play deals with the high rate of farmer suicides. “Just a few months ago, a very close friend of my husband had a fire in his barn and he went out in a neighboring field and shot himself,” Bauer says. “So, that’s really close to home for me.”

The one-hour play is scheduled to be performed at the American Legion Memorial Building in Atlantic at 2pm Sunday. Swander will moderate a discussion afterward. There’s no admission charge.

Thanks to Ric Hanson, KJAN, Atlantic