You are here: Home / Education / ‘Take a deep breath’ Rastetter advises regarding some bills 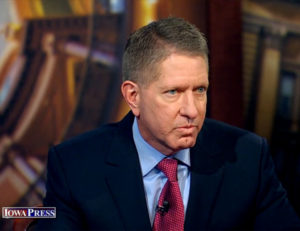 “The reality is everyone, just on some of those bills, needs to take a deep breath,” Board of Regents president Bruce Rastetter says. “…It might even be a stupid bill, but you know what? They have the right to do that and we don’t the right to control that, so we’ll all just deal with that and we’ll have reasonable conversations.”

One bill Rastetter has criticized would end tenure for professors at the state’s public universities. Republican Senator Brad Zaun says he’s frustrated by some of the sabatticals professors take and the number of classes taught by graduate students. Rastetter says Zaun’s bill is “not the appropriate way” to deal with those concerns.

Tenure is “an important part” of the universities, according to Rastetter.

Another high-profile proposal targeting the universities came from State Representative Bobby Kaufmann, the son of Iowa GOP chairman Jeff Kaufmann. In December, the younger Kaufmann vowed to send a “suck it up, buttercup” message by cutting the budgets of universities that had set up counseling for students upset by Donald Trump’s victory. Representative Kaufmann later announced he’d scale his bill back, to just impose tougher penalities on political protesters who shut down interstates. Rastetter says it was “inappropriate” for protesters in the Iowa City area to close down Interstate 80 after the election.

“We will all win some in life. We lose some in life and we all try to move forward together,” Rastetter says, “so I think that’s the key message that I heard being sent that I’d continue to support.”

Rastetter made his comments during a weekend appearance on Iowa Public Television’s “Iowa Press” program. Rastetter, an agribusinessman from Alden, served on Trump’s ad advisory group before and after the election.