You are here: Home / News / Branstad: Trump’s travel ban ‘should not have been a surprise’ (AUDIO) 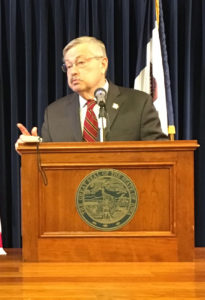 Governor Terry Branstad is the president’s pick to be ambassador to China. Branstad this morning said he supports protecting American citizens and is not going to “second guess” the way this policy is being implemented.

“This should not have been a surprise to anybody,” Branstad told reporters during his weekly statehouse news conference. “The president campaigned on doing, taking action to prevent people from coming from countries that don’t have stable governments where there’s significant radical Islamic extremist activity.”

Some international students attending college in Iowa may be unable to return home.

“If you are from one of those seven countries and you’re here, I don’t think you need to worry about it, but I think you need to be concerned about traveling back to those countries,” Branstad said. “…They’re dangerous places anyway that are in the midst of conflict…and where there’s not stability.”

Both of Iowa’s Republican senators have issued written statements. Senator Joni Ernst said the country must be “vigilant” in its efforts to combat terrorism here, but Ernst is calling for “more clarity” on how the new policy should be carried out. Ernst said the administration must ensure it’s not “inadvertently penalizing allies” in the fight against ISIS. Senator Chuck Grassley said keeping terrorists out of the country is a top priority, but Grassley said “implementation will be key to ensuring the bad guys are kept out while remaining a welcoming nation to people of all backgrounds and religions.”

Republican Congressman David Young said the U.S. must be “extra cautious and vigilant” since terrorists plan to “exploit our refugee program to harm Americans.” Republican Congressman Steve King of Kiron tweeted this weekend that it is “time to make English the official language of America.”

Congressman Dave Loebsack of Iowa City — the only Democrat in Iowa’s congressional delegation — said the president’s order is “shameful” and “flies in the face of America’s values of being a welcoming place to those who are fleeing oppression.” Loebsack said the travel ban gives “fodder” to ISIS fighters who say Islam and Christianity are at war.