You are here: Home / Fires/Accidents/Disasters / Fed Ex driver doesn’t see himself as a hero for stopping flag burning 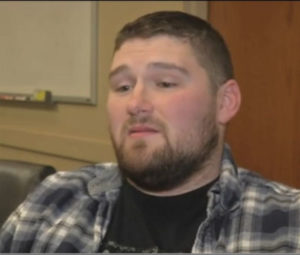 The man who being labeled as an American hero for stopping a flag-burning in Iowa City says he’s no hero.

A video Cedar Rapids Fed Ex driver Mathew Uhrin stopping a group of protesters from burning American flags on the pedestrian mall in Iowa City says has gone viral. He tells KCRG TV in an interview that he was just acting on instinct.

“I don’t feel like I deserve the praise I never wanted it, just it’s humbling you know it just it is,” Uhrin said. Uhrin served in the Army for eight years and said as a veteran he felt he had to act to stop the flag from being burned.

“It really hurts when you see it disgraced and I think that’s why everyone loves it the way that they do and that’s why I love it,” Uhrin said. The video of him stopping the flag burning last Thursday has been shared thousands of times– and had nearly eight million views on social media. People across the country are now calling Matt an American hero– using the hashtag Fed Ex Guy (#FedExGuy) and posting memes.

Matt’s favorite is one where he’s been photo-shopped into a Call of Duty video game poster. Though Matt stood up for the flag in this viral video– he says he isn’t a hero and that title should be reserved for those who died for their country.

“Each person has their own reason why they signed the dotted line and the ones whot are really the heroes are the ones that were injured, maimed, killed, or the ones that never got to see home again — they’re the heroes,” Uhrin said. He told KCRG his phone hasn’t stopped ringing from people all over the place wanting to thank him, but he wants to make sure people know he’s not asking for any donations.

“I want people to realize I don’t have a Twitter I’m not going to be asking people for stuff, if you want to buy me a meal, If you want to buy me a beer if you want to send me gift cards or something I would rather you guys take that money and there’s a plethora list of veteran charities that are so in need of money,” Uhrin said. Fedex announced in a tweet Saturday morning that Uhrin will be keeping his job at the company. He says he would do the same thing again “in a heartbeat.”

Two of the protestors were cited for open burning without a permit.