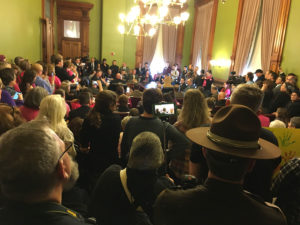 The state capitol was packed today with activists on both sides of the abortion issue. Late this afternoon, Republicans on the Senate Judiciary Committee approved a bill that would “defund” Planned Parenthood. It would direct Iowa Medicaid patients to other facilities for reproductive health exams, contraceptives and cancer screenings.

Senator Amy Sinclair, a Republican from Allerton, said the bill sets up a new network that will reach parts of rural Iowa that are not served by Planned Parenthood.

“I’ve received many comments and I have read them,” Sinclair said. “Many Iowans have brought questions to me, concerns regarding how this will affect women’s’ reproductive health and I have considered them all, including the ones that called me names and shamed me and informed me that I had a special place in hell.” 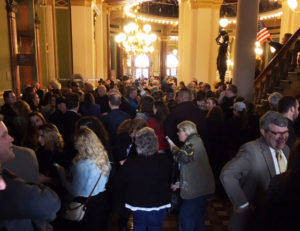 People outside the committee room

The committee met for half an hour earlier this afternoon, then resumed deliberations at 4 p.m. The committee members voted on the bill shortly before the GOP’s deadline of five o’clock. Senator Tony Bisignano, a Democrat from Des Moines, called the time limit “disrespectful.”

“It’s unprecedented in the senate that we limit debate,” Bisignano said. “…Every senator on this committee should have the right to speak as long as they wish on an issue that’s so important, obviously, to so many people in the state of Iowa.”

Senator Janet Petersen, a Democrat from Des Moines, said Iowans “have a right to be angry” about the GOP’s bill. 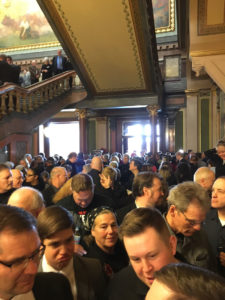 “Under the bill, Iowa women will have fewer options for their health care, not more,” Petersen said. “Twenty-eight men and one Republican woman will tell women where they can and cannot go for their care.”

State troopers were dispatched to provide crowd control. Bystanders had to file in and out of the room six times during the course of the day, due to the committee’s meeting schedule.

The crowd was polite during the committee’s opening round, but the late-afternoon session featured some outbursts from activists.

Senator Sinclair drew applause from abortion opponents as she explained why she’s advancing the bill.

“Defending the conscientious objections of the many, many Iowa taxpayers in subsidizing organizations that participate in the intentional and unnecssary termination of the human life I took an oath to defend,” Sinclair said, to applause.

All five Democrats on the committee voted against the bill. Senator Nate Boulton, a Democrat from Des Moines, said he doesn’t think the 2016 campaign was focused on “defunding Planned Parenthood services.”

“We’re moving this at an incredible amount of speed, to the expense of public input and opinion,” Boulton said.

Senator Petersen and Republican Senator Julian Garrett of Indianola quarrelled about the bill.

“We’re not aiming at women per se, but the facts of life are women bear children,” Garrett said.

Petersen replied: “No, you are using women to make a political statement.”

A few second later, a man in the crowd yelled: “Save Planned Parenthood!” Then, he quickly left the room.

The bill is now eligible for debate in the full, 50-member Senate.

(This post was updated at 5:05 p.m. after committee action and again at 6:24 p.m. with additional information and audio from the meeting.)