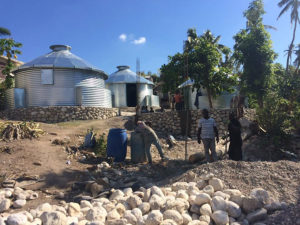 Three months after a hurricane devastated Haiti, an Iowa-based organization is continuing to help the people there recover.

GoServ Global executive director, Paul van Gorkom, says one of the big issues now is letting everyone know there is still a lot of work to do even though they aren’t in the headlines every day.

“When this hurricane first hit, we were on TV, we were on radio, there were al kinds of articles written in agricultural magazines, but then people forget about it. This is a multi-year project to help people get established down there,” van Gorkom says.

The Eagle Grove based GoServ Global built a village and orphanage using Sukupp grain bins manufactured in Iowa for residents following an earthquake that hit Haiti. He says all of those homes survived the hurricane, but they began seeing a bigger need.

“We found other orphanages that we never knew were there, and the kids were living in buildings that were pretty much destroyed,” van Gorkom says. “We’ve been able through the wonderful donors that we have to send some Safe T homes over and we’re helping other orphanages so the children have safe places to live.” He says they’ve already built has already built nearly 40 new homes and another 20 are being sent there. One of the big problems after the hurricane was finding enough food to feed the people.

“That was an issue because a lot of the food that’s consumed in Haiti was in and around the area where were are at. And all those crops are destroyed. We lost all of our crops, we lost all of our livestock that we have there,” van Gorkom says. Van Gorkom says the situation got pretty desperate for a while.

He says relief trucks would come through and the Haitians would stop the trucks and people would take the food away. A when there was food available, it was too expensive for people to buy. Relief efforts help ease the food problem and van Gorkom says his organization is focusing on building more homes.

“There’ll be a team in Haiti every single week to help,” van Gorkom says. “And right now the focus is on building more safety homes for people, because it is unbelievable how people are still living there. So, that’s our main focus right now.” He says you can help by donating to the cause to allow them to purchase more homes. Go to their website at: goservglobal.org and look for the donation tab.

Each “Safe T Home” costs $5,700 to purchase from Sukup Manufacturing, $1,000 to ship, and $300 hundred dollars for concrete for a total of seven-thousand dollars.