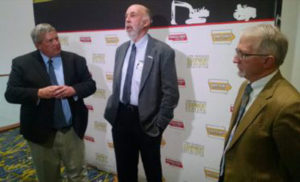 A new effort has been launched to engage Iowa farmers on the issues of weed, insect, and disease resistance in their crops.

The Iowa Pest Resistance Management Plan is an Iowa-specific plan to address pests that can adapt and become resistant to chemical, genetic, and agronomic control practices. The goal, according to Iowa State University’s John Lawrence, is to protect the effectiveness of current and future cropping technologies.

“To keep these safe and effective pest management technologies viable well into the future,” Lawrence says. ‘It impacts not only sustainability, but profitability.” Lawrence says some of the biggest concerns in Iowa are western corn rootworm and soybean aphid resistance and herbicide resistance in Palmer Amaranth and waterhemp. Iowa Agriculture Secretary Bill Northey says there are “a lot of resistance issues out there,” with more potential issues on the way.

“There are lots of different things each of us can do, but we’ve not necessarily been organized together,” Northey says. “This is an effort to do that – to have the conversations and work with each other, to take several of these individual issues and locally deal with them.” Northey says the effort is strictly voluntary. Farmer Larry Buss of Logan says he supports the effort, but adds it has to make economic sense for farmers.

“We’re interested in long term profitability for Iowa farms. But we also have to ensure that whatever practices farmers implement to do this makes them short term profitable also,” Buss says. “Because you won’t get the longterm if you’re not profitable in the short term.” A key part of the program will be pilot projects of active pest resistance management. Lawrence says the first round of pilot projects will be selected this April and get underway in May so they can operate during the growing season this year.