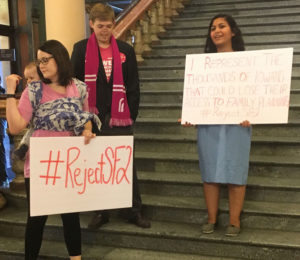 Crowds are starting to gather at the capitol as the Iowa Senate prepares to debate a bill to “defund” Planned Parenthood.

University of Iowa student Gina Mostafa, a Bettendorf native, is standing on the capitol’s “grand staircase” wearing a hospital gown and holding a sign in support of Planned Parenthood.

“I’m standing here today to represent thousands of Iowans who would lose access to health care,” Mostafa says. “Personally, I don’t know what I would have done in my own life if I didn’t have access to compassionate, non-judgmental health care through Planned Parenthood.” 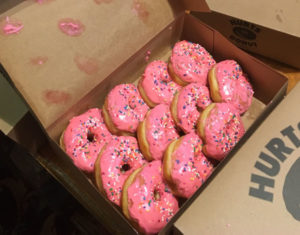 Dozens of donuts with pink frosting have been delivered to the Senate and the House today by the group “Iowa Safe Schools” as a show of “solidarity” with Planned Parenthood. Pink clothing has become the predominant attire for advocates of Planned Parenthood.

Opponents of the organization wore black clothes earlier this week to stage a “black out” as the bill was debated and passed in a senate committee. A lobbyist for The Family Leader, one of the groups registered in favor of the bill, says supporters of the legislation will start arriving at the capitol early this afternoon, to sit in the balcony and watch Senate debate.