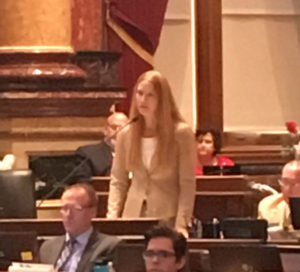 Republicans and a former Republican in the Iowa Senate have passed a bill that would no longer let Iowa Medicaid patients get contraceptives or reproductive health exams at facilities that perform elective abortions.

“They, up and down the line in most districts, elected pro-life candidates,” Garrett said. “…I don’t know of any Republican candidate that isn’t pro-life.”

Senator Jason Schultz, a Republican from Schleswig, said because of the 2016 election results, there’s a “wave” moving across the country to “defund” Planned Parenthood.

Senator Amy Sinclair, a Republican from Allerton, said there are “dozens” of other facilities around the state that can provide family planning services.

“Taxpayers should not be funding organizations with which they have conscientious objections and that is the point of the bill,” Sinclair said. “We are not cutting health care services to women.”

Senator Matt McCoy, a Democrat from Des Moines, suggested there will be fewer places in the state’s largest city for Medicaid patients to get family planning services if the bill becomes law.

“It says ‘Trust me. Trust us and the moon is made of cheese. And these are our own alternative facts,'” McCoy said. “That isn’t helpful to my constituents that rely on these services.”

“What we have before us is a punitive effort to single out low income, vulnerable women and men in a way that punishes them because they go to a provider of their choosing that you don’t like,” Bolkcom said.

“This bill takes away my constituents freedom to keep the doctors that they have chosen,” Hart said.

The debate on the legislation lasted nearly two and a half hours. Voices were raised. Tempers flared and things got personal. At the conclusion, Democrat Senator Nate Boulton of Des Moines and Senator Sinclair clashed.

“It’s about saying you don’t get to provide these services because a group of us disagree with a 1973 Supreme Court decision…What we are doing here is harming a working system based on old political battle lines,” Boulton said, prompting Sinclair to respond: “I’m a little surprised at you. I don’t know how old you are, but your mom could have chosen for you to not be here…I was born to a woman who was 40 years old…My mother could have ended my life.”

There was a brief “time out” during this exchange and Senator Sinclair quickly retracted her statement and offered an apology to Boulton and his mother. Sinclair then concluded her remarks and asking senators to support the bill. The legislation passed the Senate on a 30 to 20 vote. All 29 Republicans voted for it, as did the senate’s “independent” member. All 20 Democrats voted no.

The measure is now eligible for consideration in the Republican-led Iowa House.

(This post was updated at 2:12 p.m. with additional information.)