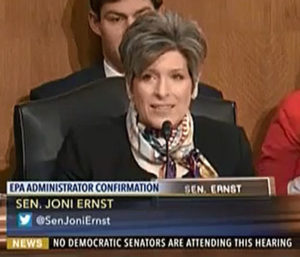 Ernst, a Republican from Red Oak, says she knows there has been some opposition, but she personally likes what she’s heard about the nominee.

“Betsy DeVos, who is the nominee for the Department of Education, has really worked hard, the way I understand over the last 30 years to support families in their efforts to provide the absolute best education for their families. Which I think many of us would agree with.”

Ernst says she shares a belief with DeVos that those who are closest to the students — such as parents, teachers and local administrators — know what’s best for students. “That’s true of those who are attending public education, private education, and charter schools,” Ernst says. “So I think that that is very important that we take a look at those works and what she has pledged to do. And that is stand up for all students.”

A couple of Republican senators have reportedly said they will not vote for DeVos, but Ernst believes where will be enough votes overall. “I do believe that she will confirmed,” Ernst says,”it will be a close vote. But I do believe as President Trump has indicated as well that she will be confirmed.”

Democrats refused to attend the committee vote Wednesday on the nominee to lead the Environmental Protection Agency (EPA) and that brought criticism from Ernst. The committee went ahead and approved Oklahoma Attorney General Scott Pruitt for the post without the Democrats. Ernst expects more of the same thing for other nominees.

“I do see it continuing unfortunately, and yes we will continue to move ahead. Because they choose not to show up for work is not a reason to shut down the Senate,” according to Ernst. Ernst said Wednesday that vetting the nominees is important and the Democrats have turned the vetting into obstruction. She said again today that the vetting process has to move forward.

“We simply can’t shut down the Senate just because they disagree with how the election turned out in November,” Ernst says.

Ernst made her comments during a conference call with reporters.