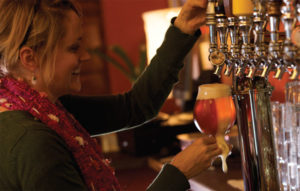 The state agency which regulates alcohol sales has sent the governor its recommendations following a review of regulations.

“The recommendations include removing the cap that is placed on them for annual production. Currently they are limited to 50,000 gallons a year. We suggest removing that cap,” Bailey says. They also recommend increasing the limit for sales to the public at the distilleries.

“If you visit a native distillery now, you are limited, you can buy 1.5 liters, that’s two bottles,” Bailey says. “We’re recommending increasing that to essentially being nine liters or a case.” The proposed change that may have the most impact allows customers be able to try the product on site.

“The big one will be — we are recommending that microdistilleries are allowed to sell their products by the glass at their facilities,” Bailey says. He says they also want to streamline the licensing process for those who sell beer.

“There has been a single A and a double A. Single A meaning regular beer and double A mewing high-alcohol content beer. We are combining those two licenses so a beer manufacturer just needs to get one license,” Bailey says. The change would reduce some of the cost and time for those who are now buying both licenses.

Microdistilleries weren’t around in Iowa until 2010 and Bailey says the recommended changes are driven by the desire to bring them into line with other producers in the industry. “This largely is to bring parity to the manufacturing sector. Right now native wineries have considerable retail privileges and brewers also have considerable retail privileges, but distillers have been limited in their retail privileges,” Bailey explains. “So these recommendations provide for a more equal playing field, a more level playing field.”

Several groups worked with IABD on the report, including the Iowa Economic Development Authority. Bailey says they are trying to continue the proper regulation of the industry, while also realizing that things have changed, and visiting the place where the alcohol is made is now a big part of the experience.

He says wineries, breweries and distilleries have become destination stops, with many of them now in towns and communities which have other tourism features as well. Bailey says it’s now up to the governor and legislature to decide how to proceed.

Bailey says the report’s final recommendation is that the state continue with its review, and move to licensing, administrative actions, and administrative appeals to look for reform opportunities there.