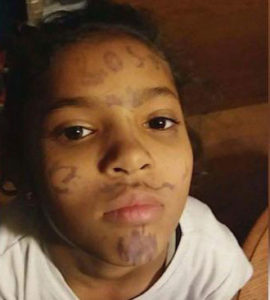 The parents of a ten-year old Council Bluffs girl want more answers after their daughter’s scary experience with bullies on a city school bus this week.

Rae-Ann Dabney says two other girls said they wanted to write on her face with a black magic marker. “I said ‘no’ and then they just grabbed me and held me down and colored on my face,” Dabney says. The girl says it was a very frightening experience.

“I was scared that they were going to draw inappropriate things on my face,” she says. The bullies did write a word on the girls face using the marker, in addition to a beard, mustache and other scribblings.

“They put ‘loser’ on my head,” she says. School officials say the two girls lost their bus riding privileges for one day. Rae-Ann’s parents are outraged and say more should be done. They’ve filed a report with the police department.