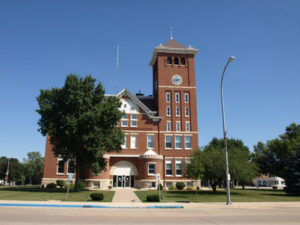 Renovation work will get underway soon on one of the oldest courthouses in Iowa.

The Wright County Courthouse in Clarion was built in 1890 and the district court room is in need of both aesthetic and security upgrades. Andrew Yackle is the building and grounds director for the courthouse.

“It was remodeled in the 1970s, that was the last time it was touched. We’re going to bring it back to more of a historical look, like it was when it was originally put together,” Yackle says. “That will involve a lot of woodwork and the tin ceiling that’s under about three layers of false ceiling currently.”

The project is expected to cost around a half-million dollars, money that’s coming from public and private donations, grants and tax dollars. Plans are being finalized to make the courtroom look like it did 127 years ago, while putting in modern technology and security measures.

“It looks like we’ll change the format of the room, meaning, where the bench sits now on the east side, we’ll move it to the south so the flow of the room is better for the court staff for getting in and out and for the sheriff’s department for getting people in and out,” Yackle says. “That’s a pretty big deal.” It’s hoped the work can begin in late spring. Renovation should take about five months.

While the work is underway in the district courtroom, all cases will be heard in the magistrate courtroom.