You are here: Home / News / Governor a ‘yes’ on hands free driving, but ‘no’ on junking DST 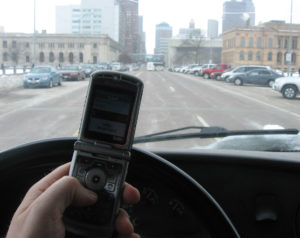 Governor Branstad is signaling his support for a law that would ban motorists from driving with one hand and having a phone in the other.

“If all we do is say: ‘You can’t text and drive,’ how do you prove that somebody was texting?” Branstad asked rhetorically during his weekly news conference. “They could be looking at this device in their hands and say: ‘Well, I wasn’t texting,’ and so you can’t get a conviction.”

Cell phone providers, insurance companies and the state’s law enforcement community are lobbying legislators to make it illegal to handle an electronic device while driving. Advocates say crash data indicates there’s been a dramatic increase in distracted drivers causing accidents. State officials say 70 percent of fatal wrecks in the past three years were caused by a vehicle that drifted out of its lane and investigators suspect many of those drivers were distracted by their smart phone.

The governor answered reporters’ questions on a range of issues this morning. Legislators hoping to change state law so Iowa no longer participates in Daylight Saving Time have run into a roadblock.  Governor Branstad indicated he is against the idea.

“I don’t think we should do anything that puts us out of sync with the rest of the country,” Branstad said. “I think that would cause a lot of confusion and problems, so I think really the Daylight Savings Time issue needs to be addressed at the national level. I don’t think it would make sense for Iowa to do something that’s different from our neighboring states in the central time zone.”

Because of daylight savings time, clocks had to “fall back” an hour this past November 3rd and clocks will “spring ahead” Sunday, March 12th. Daylight Saving Time was created during World War I to conserve the fuel used to provide light and heat to homes and businesses at the end of the day.

Critics say Daylight Saving Time isn’t saving much energy in modern day America and they point to studies which show productivity dips in the fall and spring as workers adjust to different sleeping patterns.