You are here: Home / News / ‘How you practice is how you play,’ Senate Majority Leader Dix says 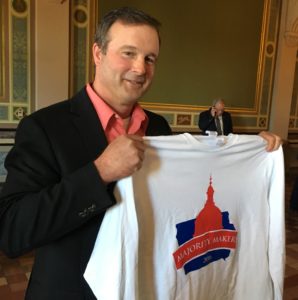 The leader in the legislature who said Republicans would “kick the door in” on state government is entering his second month in a new role.

Bill Dix of Shell Rock became the leader of Senate Republicans in the fall of 2012, when Republicans were in the minority. Now, after the 2016 election, Republicans hold 29 seats in the senate and Dix is the Senate Majority Leader.

“We embark on a new direction for the state of Iowa,” Dix said on the opening day of the 2017 legislative session. “It will be a journey that creates optimism and a stronger financial footing for our great state.”

“We promised more money back in the pockets of Iowans,” Dix said in January, “money that Iowans have earned and deserve to keep.”

A tax plan has yet to emerge from the senate, but Dix already has steered a GOP priority through the senate. Every Republican senator voted last Thursday for the bill that “defunds” Planned Parenthood.

“Iowans sent us here to change the course of business as usual here in Iowa,” Dix said during an interview with Radio Iowa, “and we intend to do everything we can to accomplish those goals.”

One of the first decisions Dix made as a new leader was to stay in the same statehouse office, on the west side of the capitol, rather than move into the office the previous majority leader — a Democrat — had occupied.

“The windows of my senate office look out over the Des Moines skyline,” Dix said.

Dix indicated he prefers that western view of private-secotr commerce rather than the eastern view of state government buildings.

“How you practice is how you play and, in this world, the last thing I want to do is become totally encompassed with how state government has done business in the past,” Dix told Radio Iowa. “I want to be looking to the future and there’s nothing that grounds me better in that than having a view that reminds me of that everyday.”

Dix, who is 54 years old, served a decade in the Iowa House, then ran unsuccessfully for congress in 2006. Dix returned to the legislature, as a state senator, in 2011. Like Dix, Bill Anderson of Pierson was first elected to the state senate in 2010.

“He came to my district when I was running. He had a race. He was running against an incumbent senator at that the time and he came over and he helped me out and I had a challenger my first election,” Anderson said during an interview with Radio Iowa last week.

Democrats in the state senate had the same leader for the past two decades, but Republicans in the Iowa Senate had half a dozen leaders before Dix took the helm.

“Bill has been successful in many ways in bringing unity back, incorporating all of us into the decision-making,” Anderson said. “I feel very good about the position we’re in.”

In 2007, Dix took over his family’s farming operation. Their biggest cash crops are pumpkins and melons, sold in Hy-Vee and Target stores throughout Iowa and Minnesota.