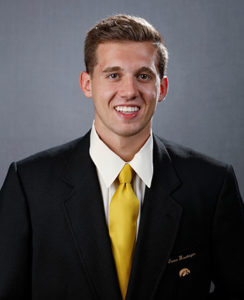 Iowa guard Jordan Bohannon has been named Big Ten Freshman of the Week.

The native of Marion, Iowa, averaged 16 points, three assists, 2.5 rebounds, and one steal in the two games in victories over Rutgers and Nebraska. He shot a blistering 69 percent from 3-point range, making nine of his 13 attempts. Bohannon’s 3-point barrage helped him break Iowa’s single-season 3-point field goal record by a freshman. He has made 54 this season, breaking the previous mark of 52 by Matt Gatens in 2009.

Bohannon helped engineer Iowa’s offense at Rutgers, posting the Hawkeyes’ first true road victory of the season. Bohannon had a game-best 17 points, making 5-of-7 from long distance, and dished out four assists with no turnovers.

In Iowa’s win over Nebraska on Sunday in Iowa City, he tallied a team-best 15 points, making 4-of-6 from 3-point range, and equaled a personal-best five rebounds to go along with two assists and one steal.

The Hawkeyes return to action on Wednesday at Minnesota.