You are here: Home / Human Interest / Manchester hopes to capitalize on tourism boost 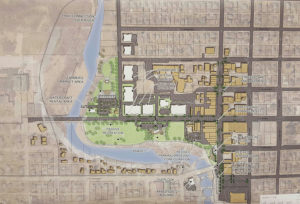 Manchester is enjoying a boost in tourism from their two-year old Whitewater Park on the Maquoketa River, and now they’re hoping to revitalize other areas along the riverfront and downtown.

A few of the ideas in a concept plan unveiled by the city are an open air pavilion, recreational activities along the riverfront, trees lining the downtown streets, a shelter with restrooms and showers by the Whitewater Park and townhomes overlooking the river.

City Manager Tim Vick says the Confluence architecture firm gathered ideas from the public during an input meeting last year to help put together the concept plan. Vick says the wanted different opinions on all types of things from trails to parking and other things downtown. He says the city knows the Whitewater Park has left a good impression with visitors — and they’re hoping to create that same vibe throughout the rest of the downtown and riverfront areas.

Vick says he’s talked with a lot of people who were eating at a restaurant or doing something downtown and saw the whitewater park and didn’t know it was there. “Or they see the crowds coming in because of the River Regatta. We talked to a couple out of Council Bluffs — they had no clue the river regatta was going on — they saw all this activity and it just drew them in. So, that’s what we’re trying to do just get more activity downtown,” Vick says.

Phase One of the project shows room for recreational activities along the Waterwater Park on the south side of West Main Street/Highway 13, with a shelter with restrooms and showers on an old store property that the City will soon tear down. Other phases of the concept plan show changes on the north side of West Main Street along the river, with room for a farmer’s market, plaza, watercraft rental and more parking on the west side of River Street and new townhomes and buildings along the east side of the street.

Ideas for downtown Manchester include lots of greenery, with bumped-out curbs with grass and trees lining the downtown streets. An overlook on the south side of the Manchester Whitewater Park is also included. Vick says these ideas are not set in stone — Confluence and the City still wants feedback from the public — but they would like to move forward as soon as they can.

“This has to go before the Planning and Zoning Commission, they have to recommend approval, and then it will go to the city council and the council will approve it. Then we’ll have to figure out how we are going to do what we are going to do.” Vick says. He says one of the pieces of the project is tearing down the Smitty’s building.

“We’ll have to do the demolition of that. Then we’ll get the funding in place, go out for bids, designs, this is something that is going to take a little bit of time…but you have to have that planning in place in order for you to start going forward,” Vick says. Vick says while Phase One will start yet this year, it could take up to 50 years to implement the entire concept plan.