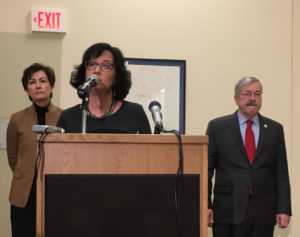 The governor has formed a new group to examine ways to boost graduation rates and job prospects for minorities in the state. The goal is to reduce the unemployment rate among minority groups in Iowa by five percent by 2022.

Lieutenant Governor Kim Reynolds said it will require coordination among educators, Iowa businesses and minority communities throughout the state.

“Together, I do believe this is an achieveable goal that’s absolutely necessary to the continued growth and prosperity of all Iowans,” Reynolds said.

Iowa Workforce Development director Beth Townsend said it’s about “equality for all citizens” and providing Iowa employers with a “diverse and skilled workforce.”

“We have sufficient programs to meet these goals,” Townsend said. “We just need to do a better job of connecting minority communities to the available programs.”

“This is really designed to make sure that the minority kids who grow up in Iowa have great opportunities to have successful and rewarding careers here,” Branstad said during his weekly news conference.

State officials plan to begin the effort by targeting four Iowa counties. Black Hawk, Dubuque, Polk and Pottawattamie Counties have “high concentrations of minority residents” according to state officials, plus the unemployment rates among the minorities who live in those counties are higher.