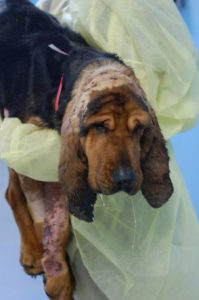 One of the dogs found in Indianola.

A south-central Iowa woman was charged over the weekend after several dead, injured, and neglected dogs were found on property she rented.

Concerned neighbors called the Animal Rescue League of Iowa last week and ARL officials, along with Warren County Sheriff’s deputies, removed 19 living dogs and three dead dogs from property near Indianola. Many of the dogs had urine and feces stains and were kept in cages.

The Warren County Attorney’s Office said in a news release that Lindsay Morrow has been charged with five counts of animal torture and 22 counts of animal neglect, as well as theft, fraud and ongoing criminal conduct.

ARL officials said Morrow described herself on a website as the director of a “no-kill” dog group called “Bully Breed Miracle Network and Rescue.”