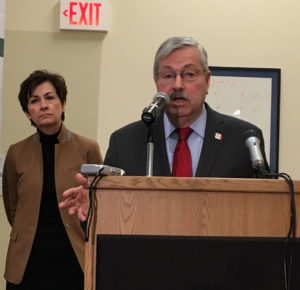 Governor Terry Branstad is pushing back on the idea the attorney general needs to weigh in on the proper transfer of power when he resigns to become an ambassador.

“The constitution is clear and the law is clear that in the case of the death, resignation or disability of the governor, the lieutenant governor becomes the governor,” Branstad says.

Branstad is President Trump’s pick to be the next ambassador to China. The only independent in the legislature says the state constitution seems unclear on whether Lieutenant Governor Kim Reynolds gets the title of governor once Branstad leaves.

State Senator David Johnson of Ocheyedan has asked Iowa’s attorney general to issue a written opinion about the matter, including whether Reynolds will have the authority to choose a new lieutenant governor.

Branstad says it’s not necessary because legislators passed a law on that a few years ago.

“In the event of a vacancy in the lieutenant governor’s office, the governor makes the appointment,” Branstad said. “It’s just as clear as can be and I don’t think there’s any question about that.”