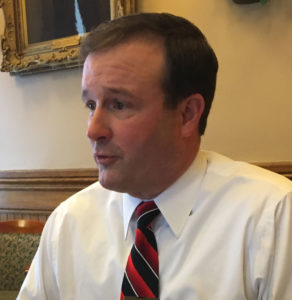 Unions are denouncing a bill Republican lawmakers have crafted that would place new limits on Iowa’s public sector unions, while one Republican legislative leader says the bill will produce a “reform dividend” for Iowa taxpayers.

“The dividend is better service to Iowans at lower cost, better teachers in the classroom and giving our local supervisors, our local school boards the decision-making ability to affect that kind of change,” Senate Majority Leader Bill Dix, a Republican from Shell Rock, told reporters late this morning.

The bill would let government managers end seniority in the workplace. It would change the rules for arbitration when contract talks break down and health care benefits could be eliminated as a discussion point during negotiations. Steve Siegel of Ottumwa has been a member of the AFSCME union for 40 years and he’s one of many union members at the statehouse today (Tuesday) to lobby legislators.

“Shame on you for picking on the people that keep us safe, make our government function. We’re workers, too, and should have rights,” Siegel said during an interview with Radio Iowa. “It’s a terrible thing to do.”

Dix, the top Republican in the Iowa Senate, says the GOP is responding to voters.

“We’ve heard loud and clear from Iowans that they believe government can do much better in the service we’re providing and are looking for a better deal,” Dix said. “…I believe it gives managers more opprotunity, opportunity to work with our best employees, to reward them for their hard work and better serve the public. That’s what our goal is.”

The bill would no longer allow union members to have their dues taken out of their paychecks. They’ll have to write a separate check to the union. Tammy Wawro is president of the Iowa State Education Association, the  union that represents more than 34,000 Iowa teachers.

“It’s a sad day in Iowa history when Republicans in the legislature introduce a bill just to be nasty and an even sadder day when they call it reform,” Wawro said during a news conference early this afternoon. “Shame on them!”

Danny Homan is president of AFSCME Council 61, the union that negotiates for 180,000 employees who work for state, county and city governments. Homan said the bill is a “political attack” on unions in the state.

“The reckless disregard for the lives of  those they represent is something that will not be forgotten in 2018 or 2020,” Homan says.

The current chairman and the past chairwoman of the Iowa Democratic Party are among the hundreds of union workers who gathered at the statehouse today. The bill will be discussed in subcommittees in both the House and Senate tomorrow.

(This post was updated at 1:56 p.m. with additional information)