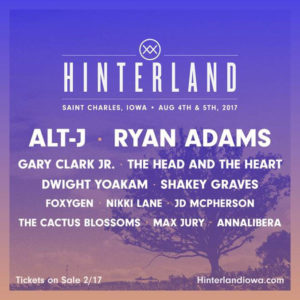 The lineup for a two-day summer music festival near Des Moines has been revealed.

This will be the third year for the Hinterland Music Festival in rural Madison County. The bill will include country-rock troubadour Dwight Yoakam, while the festival headliners will be British group alt-J and American songwriter Ryan Adams, who drew attention for his take on Taylor Swift’s “1989” – covering the entire album.

The Hinterland Music Festival is scheduled for August 4 and 5 at the Avenue of the Saints Amphitheater in St. Charles, about 30 miles south of Des Moines. Acts rounding out the bill include Gary Clark Jr., The Head and the Heart, and Shakey Graves.