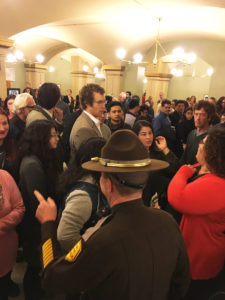 Many people showed up for the debate on the sanctuary cities bill.

A bill designed to bar Iowa cities and counties as well as schools and universities from providing “sanctuary” to undocumented immigrants sparked a statehouse protest Tuesday afternoon.

Reverend Russ Melby of Ames was one of the protest’s organizers.

The bill would bar any resolution or ordinance that “limits or restricts” enforcement of federal immigration laws. The legislation applies to Iowa’s public schools, community colleges and the three public universities in Iowa as well as private schools that receive state funds.

The bill passed the House Public Safety Committee on a party-line vote. Representative Steven Holt, a Republican from Denison, said there’s a public safety concern about providing “safe haven” to people who are not in the country legally.

“Now we all know that the vast majority of people who are not in our country legally have just come here for a better life and they’re contributing in a number of ways in our communities,” Holt said, “but there’s also that number that could have and possibly do have a violent, criminal past.”

“We don’t want Iowans to be harmed as a result of a sanctuary city policy that might encourage someone with that type of past to come to Iowa,” Holt said.

The protests over the bill extended the process, but the legislation cleared the committee late Tuesday afternoon.

The Des Moines School Board voted unanimously last night to require that federal immigration officials get permission from the superintendent if they want to talk with students or staff. Representative Holt said his message to Des Moines school officials is to “respect the rule of law.”

“If we don’t respect the rule of law, we’ve got very serious trouble,” Holt said. “And all this bill is seeking to do is just to instruct the government, state entities in Iowa that you will cooperate in the traditional sense with federal immigration authorities in the enforcement of our laws.”

The Des Moines School Board passed another resolution last night that expresses support for the 5,500 students in the district who were brought into the U.S. illegally by their parents.

So-called “Dreamers” were temporarily protected from deportation by an executive order issued by former President Barack Obama. President Donald Trump has said “Dreamers” will be treated “very compassionately,” but it’s not clear yet what Trump may propose. His focus thus far has been on the deportation of undocumented criminals.