Governor Terry Branstad says the bill his fellow Republicans in the legislature have crafted to change bargaining rights for public employee unions includes “many of the changes” he has wanted to make for years.

“I’m proud of the fact we have people in the legislature that are willing to do the right thing and are not going to be threatened or intimidated by anybody,” Branstad said late Tuesday afternoon. “We have a responsibility to the people that elected us.”

In 1974, Branstad was one of the few legislators who voted against the state’s current collective bargaining law for government workers and teachers in Iowa. Lieutenant Governor Kim Reynolds said the changes in this year’s bill are “necessary” because public employees in Iowa are being rewarded for “time served” rather than “merit.”

“It’s just simply not fair and it really demonstrates, I think, how far out of whack in the disparity and the differences that are taking place with the current collective bargaining law,” Reynolds said, “and how it has become in favor of the unions and their special interests.”

In a rare move, Reynolds and Branstad held an afternoon news conference with the Republican leaders in the House and Senate to discuss the legislation.

House Speaker Linda Upmeyer, a Republican from Clear Lake, said this bill should be “no surprise” since House Republicans tried to make many of these changes six years ago.

“The goal is to take another look and make some changes to a process that hasn’t been looked at very thoroughly in 40 years,” Upmeyer said.

“The proposal before us is about local control…It gives school boards the opportunity to improve student achievement by keeping the best teachers in the classroom,” Dix said, arguing that getting rid of seniority will let school officials fire “the occasional…bad apple” in the teaching profession. 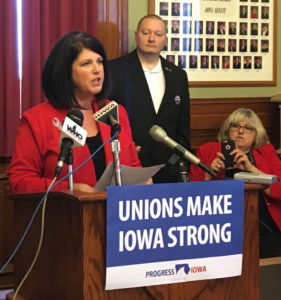 Tammy Wawro, president of the Iowa State Education Association, the union that represents 34,000 teachers, led a news conference with other union leaders earlier in the afternoon.

“I am beyond angry today,” Wawro said. “I am actually mortified.”

Wawro is urging union members to talk with their co-workers and explain the scope of the legislation.

Iowa Federation of Labor president Ken Sager said it isn’t just about state employees and teachers, the bill will hit 184,00 Iowans, including those who work for cities and counties.

“There’s been an ongoing effort, an ongoing vendetta if you will to penalize the very people in this state who provide the necessary services to provide for a civilized society,” Sager said. “There’s something fundamentally wrong with that.”

Danny Homan is president of AFSCME Council 61, the union that represents the largest share of state workers and he spoke at the news conference, too.

“The Republicans in the House and Senate have cowardly crafted this legislation behind closed doors,” Homan said. “They have been hiding from those that this affects because it’s easier to betray working men and women without having to look them in the eye.”

The three union leaders said they were not planning mass protests at the capitol. Instead, they’re urging union members to attend weekend forums legislators hold in their home districts. Police and fire fighters in Iowa would retain many of their current bargaining rights under the proposed legislation, but fire fighters and police officers were among the union members who flooded the capitol yesterday to object to the bill.

A subcommittee in the Iowa House will discuss this collective bargaining bill early this (Wednesday) morning. A Senate subcommittee has a two-hour meeting on the same bill scheduled to start at 11 a.m.

It appears the bill is likely to pass both the House and Senate next week. The governor has indicated he’ll quickly sign it into law.