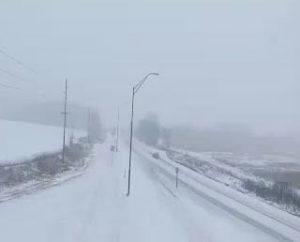 Light snow created some slick roads across Iowa’s southern half this morning. There were several crashes on Interstate 80, including one that closed the westbound lanes between Avoca and Shelby.

“That’s the corridor where we’ve seen two to three inch amounts. The heaviest snowfall amount we’ve seen is four inches in Atlantic,” Martin said. The snow fell mostly in an area that was covered by a Winter Weather Advisory.

“It wasn’t a big time system by any means, but it was just enough snowfall to make things a little tricky during the rush hour commute this morning,” Martin said. The snow that’s now on the ground will likely disappear by the weekend.

“Today and tomorrow will be pretty cool. Then, on Friday, we’re forecasting temperatures back up in to the low-to-mid 50s,” Martin said. High temperatures today across Iowa will range from 15 to 25, with highs on Thursday mainly in the 30s. Friday and Saturday will be warmer, with highs in the 50s, before things cool off again on Sunday. There’s another chance of snow on Saturday.

“We have a chance for some light rain or snow Saturday into Saturday night, but again it’s going to be very light and we’re not expecting it to create much of a fuss at all,” Martin said.