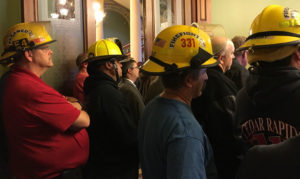 The committee room was packed for the senate meeting on the collective bargaining law.

The Senate Labor Committee debated for nearly 90 minutes this afternoon before a bill to change Iowa’s collective bargaining law for public employee unions cleared the committee on a party-line vote.

“Obviously, this is a contentious bill. We have more input and interest in this than we have on most of our bills,” said Senator Jason Schultz, a Republican from Schleswig who is chairman of the Senate Labor Committee.

Schultz said local officials tell him “the deck is stacked against” management under the current system. And Schultz suggested a silent majority of Iowans back the bill.

“I wish that we had the thousands of people who support this come forward. I wish they filled the room, but unfortunately what I hear from them is while they support this, they’re actually afraid to come forward,” Schultz said. “They’re afraid of the toxic environment that this could create. They’re afraid of the retribution in the workplace and, therefore, it falls to us to do the public work of moving forward.”

Senator Rich Taylor, a Democrat from Mount Pleasant, noted the heavy presence of state troopers in the room and around the capitol as legislators debated the bill.

“They’re out in the parking lot. They’ve got extra cameras out here. We know that this isn’t the right thing or we wouldn’t be so damned scared and we’re scared, apparently, or we wouldn’t have ’em here,” Taylor said. “You know, I wonder: Is this is the straw that’s going to break the camel’s back?…How long are they going to stand for this? I mean, this is war against the workers of Iowa.”

Senator Bill Dotzler, a Democrat from Waterloo, called the bill a “mean-spirited” attack on unions.

“This bill will destroy lives, treats people unfairly, will cause disruptions to public safety,” Dotzler said.

Schultz used the word “antiquated” to describe the state’s rules for contract negotiations with government workers.

“We find ourselves in a different America, a different Iowa and we believe it is time to…modernize, to update,” Schultz said, “to bring us up to today’s conditions.”

“They’re your neighbors. They’re your relatives,” Bisignano said. “They’re the people who do a lot of great service to you and I feel bad today that they have to sit here and basically feel like somehow they’ve become the problem because that’s what this bill says.”

Schultz closed debate on the bill by saying it sets up a system to “reward the best” public workers and provide government services in an “innovative way.”

“A piece of legislation that will serve Iowa well for a much longer amount of time than we expect,” Schultz said. “I am hoping that something that becomes part of Iowa’s Code and culture.”

The crowd watching Schultz and the rest of the committee talk was mostly made up of union members. The only disruption came as one Democratic senator struggled to remember a familiar quotation and laughter spiralled through the crowd. After the senator got the quote right, the crowd applauded. Once the bill passed, a woman in the room yelled: “Boo,” but the rest of the union members filed out without speaking to senators.

The bill is now eligible for debate in the full senate. Key legislators expect it to come up for a vote early next week.