You are here: Home / Sports / Hawkeye women must move on without starting point guard. 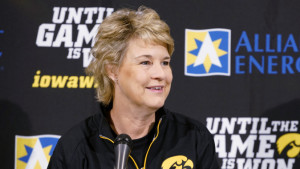 The Iowa Hawkeye women will be without their point guard as they make a push for the NCAA Tournament beginning with tonight’s game at home against Michigan State. Sophomore Tania Davis suffered a torn ACL in her right knee in the fourth quarter of Sunday’s loss at Michigan. She will undergo surgery next week.

“Obviously the loss of Tania is a blow to our team and one that I wish we had more time to adjust to but we don’t”, said Iowa coach Lisa Bluder. “We have had two practices to get ready to face a really good basketball team without our leader.”

The role of point guard will be taken by freshman Kathleen Doyle.

“She has played that position for us at times and played it her entire high school career”, added Bluder. “But we are losing depth.”