You are here: Home / News / Look to the sky tonight to see a lunar eclipse, comet 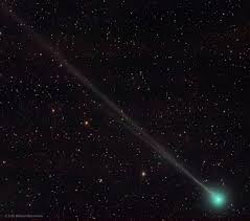 Stargazers in Iowa will have something of a triple-play late tonight and early tomorrow. We’re being treated to a lunar eclipse, a “snow moon,” and a relatively close fly-by from a comet.

Steve Spangler, a professor of physics and astronomy at the University of Iowa, says if you’ve never heard of a “snow moon” before, you’re not alone.

“The ‘snow moon’ term is not one that’s in broad astronomical use, in fact, I had to look up in the Astronomical Almanac to see what the definition is,” Spangler says. “It just means a full moon in February, so except under rare circumstances, every year, you’ll get one.”

While that full moon may be big, bright and beautiful, it’ll be covered in darkness early in the evening, but only temporarily. “Eclipses of the moon are due to the moon going into the shadow of the Earth,” Spangler says. “All of the light in the solar system, most of it anyway, comes from the sun. The Earth is an opaque object and it casts a shadow back into space behind it and sometimes, at the time of a full moon, the moon will go through this shadow.”

This is what’s known as a penumbral eclipse, as the moon won’t be completely covered by the earth’s shadow. The peak of the eclipse should arrive at 6:43 P.M. Central time. Early Saturday morning, there’ll be another space spectacle to behold as Comet 45P will be coming into view around 3 A.M. It’ll be in the constellation Hercules but don’t confuse comets with “falling stars” or meteors. There will be no startling “shooting star” streak across the night sky, as a comet typically appears stationary, if you can find one.

“It’d be a good idea to get a star chart so you’ll know where you’re looking, otherwise, it’s not something you’re going to casually notice in the sky,” Spangler says. “You’ll need at least a good pair of binoculars or a small telescope and a star chart to show exactly where it is.” Comet 45P will be about 7.4 million miles away from Earth, which is considered very close in astronomical terms.