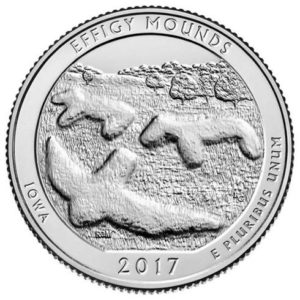 The quarter is part of the U.S. Mint’s “America the Beautiful” series and Effigy Mounds park Ranger Bob Palmer says it fits the beautiful description very well. “Oh, it’s amazing. In terms of being able to depict Effigy Mounds on something that small — to be honest with you — I was pretty skeptical when this whole process started some time ago,” Palmer says.

He says his skepticism about the quarter quickly changed. “When I saw the coin for the first time I was absolutely blown away that the essence of the Effigy Mounds could be captured on something that’s a little more than an inch in diameter,” according to Palmer.

There are some 200 burial mounds at the monument along the Mississippi River Valley, and the coin shows one grouping. “What it depicts are three mounds, two of what we tend to call bear mounds and then one bird mound. And the orientation of those three mounds represents three mounds that are found up in the south unit of the park,” Palmer says. “So, anyone who is very familiar with the park and very familiar with the various mound groups looks at that and immediately knows what that’s depicting. So, it pretty neat that it’s actually depicting something that is true to life.”

The mounds were believed to have been built by American Indians around 1,000 years ago. President Harry Truman signed the proclamation that created Effigy Mounds National Monument on October 25th, 1949. The quarter was designed by Sioux City native Richard Masters , who is an associate professor of art at the University of Wisconsin-Oshkosh.

Palmer says there’s been a lot of local buzz since the coin was officially released Monday, and he says it could lead to more attention as people across the country discover the coin. “I would think that if somebody would take a coin out of their pocket and see Effigy Mounds that might lead to a little more interest,” Palmer says. He says the amount of attention they get remains to be seen, but there is certainly a lot of interest in northeast Iowa.

Palmer there are 80 to 85,000 visitors at the monument every year — and for those Iowans who have never been there — the scenery itself is worth it. “This part of the state is very different than the rest of the state,” Palmer explains. “And the Effigy Mounds are primarily found…in southern Wisconsin and the do reach into extreme northeast Iowa. And the geography and topography here more represents what you’d find in Wisconsin, southeastern Minnesota and northwestern Illinois. So, it is a place that is special unto itself.”

The visitor center at Effigy Mounds is open year round except for Thanksgiving Day, Christmas Day, New Year’s Day, and during extreme weather conditions. The hours vary and you can check them on their website.