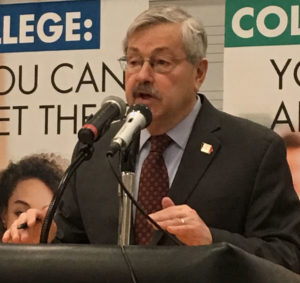 “This is of grave concern not only to the United States, but to China, Japan and other countries,” Branstad said during his weekly news conference (audio here).

Branstad, the president’s nominee to be ambassador to China, expects to go before the Senate Foreign Relations Committee in March to answer questions about the appointment.

“I know it’s a tough assignment,” Branstad said. “I’m aware of the problems with North Korea and many of the other issues that I’m going to have to deal with.”

The First Lady of Missouri was in Iowa last Friday to help Branstad and his wife, Chris, prepare for working in China.

“She’s got a PhD and she teaches at the University of Missouri,” Branstad says. “She’s been to both China and North Korea and she’s putting a panel of people together to meet with me at the winter meeting of the (National Governors Association) in two weeks.”

The bipartisan National Governors Association will be meeting in Washington, D.C. On Sunday, February 26, Branstad will receive an award from his fellow governors for “his service as the nation’s longest-serving governor ever.” Branstad is in his 23rd year as Iowa’s governor. His appointment as ambassador to China must be confirmed by the U.S. Seante.