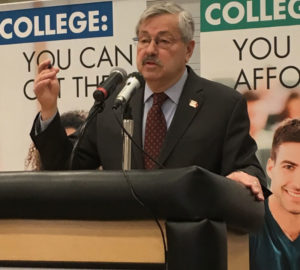 Governor Terry Branstad this morning said he’d like to see his fellow Republicans in the legislature pass a “modest” hike in the state minimum wage.

“I just think we need to look at what our neighboring states are doing,” Branstad said. “I want to keep us competitive.”

Iowa’s minimum wage is $7.25 an hour, identical to the federal minimum wage. Missouri, Nebraska, Minnesota and Illinois all have higher base wage rates.

“I don’t want anything that’s going to destroy jobs, but I do think the present minimum wage has been in place for some time and it may be appropriate to do a modest increase over a period of time,” Branstad said, “like some of our neighboring states have done.”

A bill that’s eligible for debate in the Iowa House would nullify the higher minimum wage rates approved in four Iowa counties, restoring a “uniform” statewide minimum wage rate of $7.25 an hour. Branstad says it “makes sense” to have a uniform minimum wage.

“I want to work with the legislature on this issue, but my preference would be to see a modest increase in the minimum wage, phased in over a period of time,” Branstad said during his weekly news conference. “But obviously this is a legislative issue and I always reserve judgment on bills until I see them in their final form.”

The last time the Iowa legislature voted to raise the minimum wage was in 2007 when Democrats were in control of both the House and Senate. It was the first bill Democratic Governor Chet Culver signed into law.