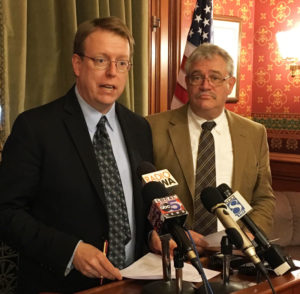 Democrats in the legislature says Republicans are “railroading” a bill that narrows union negotiating rights public sector workers. The bill was revealed last Tuesday and it’s likely to be debated in both the House and Senate this week.

“Republicans need to slow down the bill on collective bargaining and take time to listen to Iowans,” Senate Minority Leader Rob Hogg, a Democrat from Cedar Rapids, said during a statehouse news conference early this afternoon.

House Minority Leader Mark Smith, a Democrat from Marshalltown, said “thousands” of Iowans attended forums and rallies this weekend to raise concerns about the bill.

“Iowans want to be heard on this issue and are fed up with this being ‘fast tracked,'” Smith said.

A two-hour-long public hearing on the bill is set to begin at 6 p.m. tonight in a statehouse committee room. Nearly a thousand people have registered to speak.

“We’ve said all along we plan to use a pretty normal process,” House Speaker Linda Upmeyer, a Republican from Clear Lake, said last Thursday during a statehouse news conference. “So the bill was introduced, subcommittee, committee, public hearing and then we’ll have a full debate on the bill.”

However, the length of the debate may be measured in days rather than hours. The Democratic leader in the senate said Democrats intend to discuss each of the 67 sections of the bill in detail.