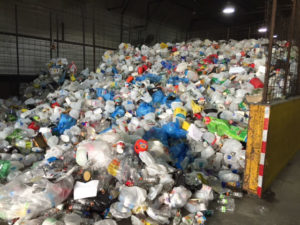 A study by the Department of Natural Resources shows a recycling program used effectively in rural areas of some other states may not be the best system to use in Iowa.

The DNR’s Jennifer Wright says states like New Mexico have used a “Hub and Spoke” approach where the “spokes” are collection points for recyclable material.

“And they collectively work together and create partnerships to bring it into a hub so that they have enough materials enough commodity products….the cardboards, the papers, the plastics. So they get enough to effectively sell it back to the market,” Wright says. Wright says the DNR wanted to find out if there was a need for this type of program.

“There was a thought maybe that rural parts of Iowa were challenged with their ability to effectively recycle,” Wright says. She says rural areas are much different than the cities where recycling has evolved into a fairly simple process. “You have your single stream bin and you roll it out to the corner every two weeks and then it goes of to a facility and then it gets process. But, when you get out into our rural communities — they do have recycling — it just may not be provided curbside,” Wright explains.

She says they found the process could be improved in rural areas. “The infrastructure is pretty robust, we have a lot of options available, it’s just that there are some inefficiencies within the system,” Wright says. Part of the problem is all the various collection points might not have enough of the material to make it worthwhile. Wright says they determined installing a whole new system isn’t needed, but some modifications would help.

She says there could be a hub and spoke for certain commodities, with the whole idea of helping them grow and become more efficient. Wright says for example, collectors might work together to take their glass to one buyer to be able to get the best price. Wright says the focus moving forward will be on finding ways to help the rural recycling efforts get better.