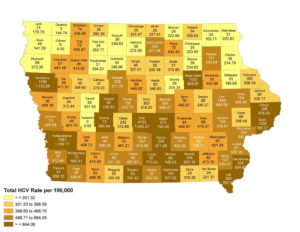 A new report from the Iowa Department of Public Health shows cases of Hepatitis C have shot up in Iowa. The Health Department’s Randy Mayer oversees the bureau which tracks the disease.

“It’s increased about 200 percent since 2000. And what we think that shows is that providers have the message that they should be testing for Hepatitis C and that works out with new diagnoses,” Mayer says. The number of cases in Iowa went from 754 in 2000 to 2,235 cases in 2015. Mayer says Baby Boomers — those born between 1945 and 1965 — make up one group that has the most positive tests.

“There was also an increase in diagnoses among young people…people under the age of 30,” Mayer says. “That’s important because that represents some ongoing transmission. People under 30 are probably injecting drugs and are transmitting to other people.” The number of diagnoses among those between the ages of 18 and 30 has more than quadrupled since 2009, with 303 diagnoses in 2015. Mayer says drug use appears to be one of the reasons for the rise in the cases among young people.

“Hepatitis C seems to be related and associated with the increase in opiod use and some of the problems that you’ve been hearing about opiod overdoses,” Mayer explains. “So, a lot of the people who start using opiod drugs — like heroin or prescription opiods — eventually start injecting it. And what’s happening is they eventually get hepatitis during that process.”

Hepatitis C is the leading cause of liver cancer and liver transplants in the U.S. Mayer says those who are older may have contracted the disease and not know it.

“The Baby Boomers probably got infected when they were much younger when they might’ve been dabbling in drugs or they might’ve been exposed through blood before we were screening blood,” Mayer explains. “They really are not transmitting to other people, but there are at high risk for liver complications if they don’t get diagnosed soon.” He says Hepatitis C can be treated and he says they are now stressing the importance of Baby Booners getting tested.

“Then anybody who is currently or in the past has injected drugs –even once — because Hepatitis C is extremely infectious, it’s very easy to get form not only sharing needles, but sharing equipment, touching someone’s spoon or whatever they might have been using to inject those drugs. It’s very easy to transmit. So, that’s really what we want to focus on right now, increase in testing,” Mayer says. He says Hepatitis C can go undetected for years.

Mayer says you usually don’t see symptoms until you are so far along that your liver is already having significant problems. The IDPH study found more than 55 percent of Iowans between the ages 18 and 64 who have Hepatitis C live in one of six counties: Polk, Linn, Scott, Woodbury, Pottawattamie, and Black Hawk.