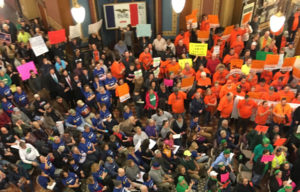 Thousands showed up at the statehouse for a hearing on the bill last night.

Representative Steven Holt, a Republican from Denison, says the GOP is responding to the concerns they’ve heard from constituents.

The bill as originally written would have allowed teachers and other public sector workers to negotiate over one subject: base wages. The House GOP’s changes would permit other subjects to be discussed during contract talks — like seniority rights and how to handle workplace grievances — but only if both the union and managers agree those issues should be negotiated. In addition, Holt says the GOP’s new draft plan aims to reassure public workers that layoffs and firings should be done for “proper cause.”

“For me it’s not about how many minds are changed, it’s about making the bill as good as it possibly can be for everybody involved,” Holt says, “for our public employees and for the people of Iowa.”

Holt met with reporters to discuss the changes and rejected the idea the GOP is making “concessions.”

“You listen. You take input in. You go back and look and say: ‘Maybe this would be better,'” Holt says. “And that is what we did. I wouldn’t call that a concession. Anytime you go through this process, you look for ways to make things better.”

The Senate began debating their own bill just before four o’clock this afternoon. The House is debating other bills at this hour.