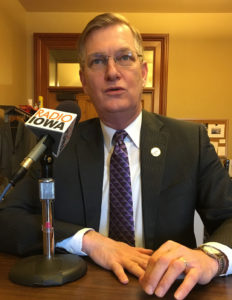 The new chief executive at the University of Northern Iowa says collective bargaining is part of the school’s “culture” and UNI president Mark Nook says professors and administrators are keeping a keen eye on legislative action on the issue.

“It certainly is impacting morale on campus,” he says.

The Iowa House and Senate are scheduled to begin debating a bill this  afternoon that would change Iowa’s collective bargaining law for public sector unions. As currently written, it would restrict bargaining to the subject of base wages.

Nook says it will require building “a relationship of real trust” to come up with the new process of negotiating contracts.

“The faculty, in particular, and even most of the administrators, are used to a certain process and this will be a difficult change,” Nook says, “and it will take a lot of work and a lot of collaboration.”

United Faculty, the bargaining unit at UNI, has registered its “strong opposition” to the bill. The union’s leader says after “continued” budget cutbacks on campus and the abrupt exit of Nook’s predecessor, “there’s only so much that faculty and students can take before they lose confidence in UNI.”

Nook’s “official” first day as UNI’s president was February 1. Republican legislators unveiled their collective bargaining bill last Tuesday and since then Nook’s been fielding concerns from faculty about how their benefits might change and how layoffs might be handled in the future.

“We’ve started the conversations about what might happen next,” Nook says, “but it’s really just at this point process: how do we go about doing some things?”

Nook made his comments this morning during an interview with Radio Iowa.