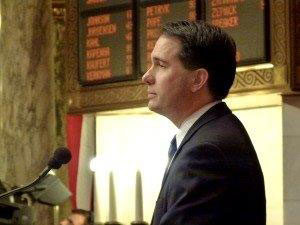 In 2011, Walker enacted major changes in that state’s collective bargaining law. Walker spoke with reporters in Wisconsin today about his advice to Iowa Republicans.

“Ultimately they’re going to face some of the same things we faced in terms of attention and potentially protests, but I told them to look at where we’re at over the last six years,” Walker said. “We’ve saved some $5 billion. Our economy is dramatically better and we have a ‘reform dividend’ that we’re able to reinvest into schools, into higher education, into tax relief, into welfare reform.”

“I encouraged them to look at the facts, not just the hype,” Walker said.

“Iowa does not need to follow Wisconsin’s bad example where 28 percent fewer students choose education as a profession as a result, teacher shortage areas have been exacerbated, rural schools can’t attract or retain teachers,” Butler said, “and fewer candidates apply.”

The Iowa House and Senate are scheduled to begin debating the GOP’s collective bargaining plan at three o’clock this afternoon. The Iowa Democratic Party and other groups opposing the bill are urging people to go to the statehouse or watch the debate online.