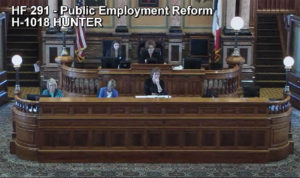 House Speaker Linda Upmeyer is presiding during debate on the collective bargaining law.

It’s day two for statehouse debate of a bill that will change the rules for negotiating pay and benefits for government workers in Iowa.

The House resumed debate shortly after 10 o’clock this morning. Representative Sharon Steckman, a Democrat from Mason City, was first in line to speak.

“Wow, last night we almost gave Iowa workers and families the worst Valentine’s Day present ever, but we put it off to today, I guess,” Steckman said. “This bill, if enacted, strips away in every city that we all represent. It cuts and guts. It’s the Wisconsin bill on steroids.”

In 2011, Republicans in Wisconsin reduced union bargaining rights for teachers and other government workers in that state. Democrats in the Iowa legislature are staging a form of the filibuster. Democrat after Democrat is speaking on the GOP’s bill and the House has yet to take a vote on any of the dozens of amendments proposed to make changes in the legislation. The Senate took one vote yesterday and debate on the bill in the Iowa Senate resumed at about 10:30 this morning.

Senator Rich Taylor, a Democrat from Mount Pleasant who’s a retired state employee, worked at the Iowa State Penitentiary for 27 years. On Tuesday night, he used a term from the barnyard to describe the legislation.

“I call bullshit. This is not collective bargaining reform,” Taylor said. “This is a direct attack on public employees.”

Taylor suggested Republicans are “going to war” against union works.

“They say: ‘All’s fair in love and war,'” Taylor says. “Well, the war’s just starting and I hope you’re really prepared for that because this isn’t going to be pretty.”

This morning, Senator Joe Bolkcom, a Democrat from Iowa City, tweeted about the debate. Bolkcom said: “It is much harder for Republicans to vote away your rights in front of a public audience” and he asked Iowans to come to the capitol to watch the debate.