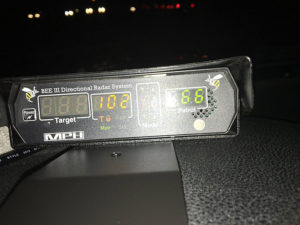 The Iowa State Patrol is reporting troopers are seeing more motorists who are traveling 20 to 30 miles-an-hour over posted speed limits. Patrol Sergeant Nathan Ludwig has a few ideas about why these drivers are taking such risks.

“I think cars are faster and people, just bottom line, they’re in a hurry. So, they want to push the pedal as fast as they can go and see if they’re going to get caught or not,” Ludwig says. There are fewer troopers monitoring Iowa’s roadways than there were many years ago, but Ludwig says there are many ways for the patrol to spot speeding motorists.

“One of the things we try to utilize a lot more is aircraft for speed enforcement,” Ludwig says. Other motorists, who are obeying the speed limit, can also help the patrol track down extreme speeders.

“Safely call 911, that’s probably the best thing, because they’re a risk to everyone else out there that’s on interstate,” Ludwig says. “We get broadcasts all the time on the police radio about a vehicle traveling at a high rate of speed and if there’s an officer in the area, we’ll try to get that person stopped.”

Last week, the Iowa State Patrol posted a photo on its Facebook page showing a vehicle was clocked at 102 miles-an-hour on Interstate 80 near Des Moines.  Here’s the Facebook message that went with the above photo:
Des Moines. Early this morning, a State Trooper stopped a vehicle at a high rate of speed on Interstate 80 in Polk County. Just how important is time to a driver? For a vehicle traveling at 102 mph, it would take 35 seconds to travel one mile. At the speed limit of 70 mph, it would take a vehicle 51 seconds to travel the same distance. Is a $276.00 fine and potential loss of license really worth 16 seconds of your time? Please slow down!