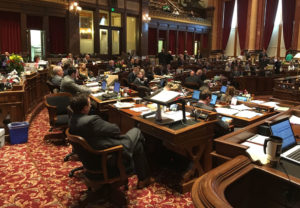 After hours of debate,  Republicans in the Iowa House and Senate have passed a bill that scales back the rights government workers have had to negotiate over wages, benefits and working conditions.

The bill passed the House on a 53-47 vote earlier this afternoon. Union members gathered in the balcony overlooking the Iowa Senate floor as senators drew near a vote on the same bill shortly before 3 p.m. Activists stood with their fists raised and cheered as Democrats individually yelled out their “no” votes for the tally. Shouts of “shame” and boos rang out as the formal voting process on the bill began in the senate.

All 29 Senate Republicans voted for the bill. All the Senate Democrats, plus the Senate’s independent member voted against it.

Read more about today’s House action and how the bill moved through the legislative process here.

Representative Walt Rogers, a Republican from Cedar Falls, said the bill will change the dynamics of public schools and other government workplaces.

Democrats say the bill is an “assault” on public sector unions and a “gift” to out-going Governor Terry Branstad as well as powerful GOP interest groups.

“Why even have a legislative process? Why don’t you just go off with your secret committee and have the emperor downstairs announce there’s a new law?” Senate Minority Leader Rob Hogg, a Democrat from Cedar Rapids, said. “This senate exists for a reason and it’s so that senators can have input.”

Much of the debate over the past three days, in both the Senate and House, featured legislators reading letters and email from Iowans. Representative Timothy Kacena, a Democrat from Sioux City, read a statement from his local mayor.

“It seems like our public employees are under attack because of the influence of outside interests that believe all public sector employees and most government officials care only about themselves,” Kacena read, quoting Bob Scott, the mayor of Sioux City.

Representative Skyler Wheeler, a Republican from Orange City, read some correspondence, too.

“Currently in my district, I have more people who have voiced support for this bill than have voiced against it,” Wheeler said. “Here are a few of their words…’The current system is not fair to the taxpaying citizens of Iowa.'”

After two days of on-and-off debate in the Iowa House and Senate, on Thursday morning GOP leaders set deadlines, so votes began in the House at noon Thursday, then a couple of hours later in the Senate. Senator David Johnson of Ocheyedan, the only independent legislator, said Republicans did not campaign on promises of repealing collective bargaining for teachers and government workers.

“We have a bill here that’s going to tear this state apart,” Johnson said. “This is shameful.”

Governor Branstad called passage of the bill a “monumental” achievement.

“Obviously, this is a difficult and contentious, but it’s something that I think is really needed, especially in the health care area,” Branstad said during an interview. “I’ve been trying for decades to get where the union employees to contribute a reasonable amount.”

Branstad plans to sign the bill into law as soon as possible.