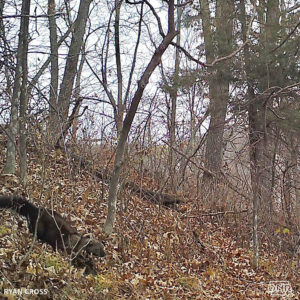 The Iowa Department of Natural Resources has confirmed the sighting of an animal that hasn’t been seen in the state in 150 years.

Furbearer biologist, Vince Evelsizer, says a trail camera in Allamakee County in eastern Iowa caught a picture of a fisher. “Fishers are a mammal that belong to weasel family — Mustelidae — so they have some of the same characteristics of some of our weasels and otters that are established in our state already,” Evelsizer explains.

The DNR posted the photo of the fisher on its Facebook page. Evelsizer says they are about the size of a raccoon, but built like a fox with short legs.

“Mammals like the fisher were native to Iowa, but were wiped out in the 1800s,” Evelsizer says. “We don’t have a ton of history on them, but they are carnivorous for the most part and feed on things like squirrels. Grey squirrel, fox squirrel and even the little red pine squirrels that are typically in the northern U.S.,” he says. He says they can move up a tree quickly and catch a squirrel, even though they are bigger than them. Evelsizer says the fisher can also kill and eat another animal that predators usually stay away from.

“Fishers are capable of killing a porcupine. It’s not usually a pretty way that they do it. They usually attack the face and head region of a porcupine after its been backed up against a tree or something like that. They’ll go right for its face,” according to Evelsizer. This fisher is believe to be a visitor from the north.

“Minnesota DNR and other wildlife folks up there have noticed a southward push of fishers claiming more range in the southeast part of Minnesota,” Evelsizer says. He says the increase in the fisher population and its movement into Iowa is consider a good thing. “It’s always neat when you see some animals expanding their range again,” he says.

Evelsizer says the movement of the fishers into Iowa doesn’t pose any concerns for the DNR. “In general fishers are not a safety threat to humans. And typically are fairly secretive and live in the woodlands,” Evelsizer says. The trail camera photo was taken in November. Evelsizer says its too early to know if the fishers will establish a population in Iowa.