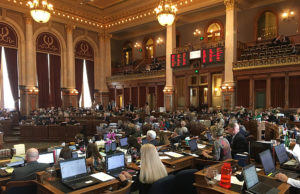 Lawmakers in the Iowa House.

All but six Republicans in the Iowa House have just passed a bill that will dramatically reduce the subjects teachers and other government workers may bring up during contract talks. Governor Terry Branstad is commending his fellow Republicans.

“They’ve been working hard and I’m appreciative,” Branstad said during an interview this morning. “This is a very monumental undertaking.”

There’s been a monumental debate, stretching over three days in both the House AND Senate. Senators will end their debate at 2 p.m. and begin voting on the bill. Democrats like Representative Timothy Kacena of Sioux City say Republicans are engaged in “union busting” by passing this bill.

“Morale will suffer. Labor-management relations will suffer. Workers and their families will suffer,” Kacena said late this morning. “…May God forgive you because the working men and women of Iowa will not.” 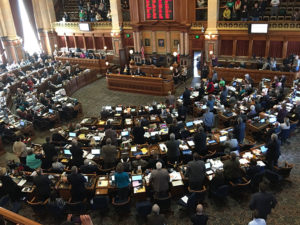 House Democrats stand in opposition to the bill.

Democrats in the House stood to signal their opposition to the bill, each casting their votes out loud rather than punching the red button on their desk.

A retired state trooper and a lawmaker from Anamosa, where a state prison is located, were among the six Republicans who voted against the bill.

“In many cases, we have simply inadvertantly created a system that discourages innovation and, instead, simply protects the status quo,” Holt said.

Governor Branstad intends to sign the bill into law as quickly as possible.

Democrats stage a sort of filibuster on labor bill

Debate on bill begin in both House and Senate