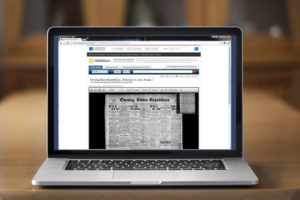 Millions of pages of newspapers will be digitized so they can be easily searched.

The State Historical Society of Iowa is on the way to making millions of pages of newspapers that chronicle the state’s past digital.

Historical Society spokesman, Michael Morain says they’ve reached a deal with a Cedar Rapids restoration company that solves a problem they’ve been working on for some time.

“For at least five years we’ve been trying to figure out the best solution to preserve our collection of historic newspapers from all across the state in a way that keeps them for posterity and makes them more accessible to a wider public,” Morain says.

He says the first step is for Advantage Companies to put the newspapers onto microfilm. “And then the next step, we’ll take that microfilm and digitize it, so that with a click of a button you can search and scan and do all the kinds of things that we’re are used to,” Morain says. Morain says the newspapers provide an important link to our past.

“Anyone who has done any sort of research project knows that newspapers are invaluable — they are really the first draft of history,” Morain says. “Here in the state of Iowa’s collection, we have newspapers dating back to Iowa’s earliest days. Our first edition is in 1837 from Iowa’s territorial days, and we have hundreds of titles from every county.” The state has a 5-year contract with Advantage and they are expected to start the work in the spring.

He says it will take some months to move the newspapers to their facility, with the longer process being the digitizing of the papers. The contract also calls for the company to work out the copyright issues for the newspapers that were printed after 1924.

He says the company is doing the work for free right now. “It’s likely that Advantage will eventually charge subscriptions for the public to access the information. It’s still in the very first stages of that,” Morain explains. “…I think the way it will work out is people can go to their local library and use the library’s subscriptions.” 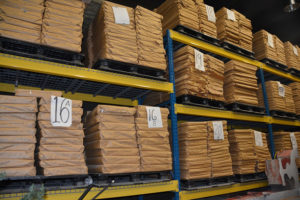 Newspapers waiting to be digitized.

Morain says it is exciting to know that the Historical Society will go from stacks and stacks of newspapers that would take hours to look through, to a digital system that will be searchable with a few keystrokes.

“Computer technology now is so advanced, that if you type in a word….it can scan and it can visually recognize the word. So, it will be as simple as a Google search,” Morain says.  “If you want to know about your great grandma Sally, it will be able to search through and see if Sally’s name appears anywhere in that newspaper.”

The State Historical Society’s newspapers will be on loan to Advantage and then returned after being digitized.