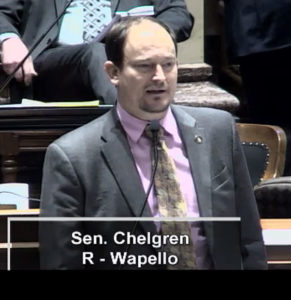 The Iowa Senate engaged in a marathon debate that began at about 10:30 Wednesday morning, ran off-and-on all day and into the night. It was temporarily suspended at about 8:30 this morning.

Senator Herman Quirmbach of Ames is among the Democrats who’ve proposed change after change to the controversial bill that reduces the collective bargaining rights of government workers.

“When we began the debate on this amendment it was 6:11 a.m. It is now 8:13 or 8:14. In the two hours and three minutes in between, the sun has come up and shed a bright, clear light on this day,” Quirmback said. “but I’ve got to tell you, this bill is as ugly as it was before.”

Republicans who hold a majority of seats in the senate rejected all the amendments Democrats proposed. Senator Tony Bisignano, a Democrat from Des Moines, said Republicans in the Senate are a “disciplined group.”

“You’re just gettin’ ‘er done and you’ve offended about every Iowan who lives in my district and I don’t know who’ve you’ve got left, but I’m sure you’re going to let us know next week who you’re going to go after and what Iowans we’re going to disturb and upend and destroy their life and their livelihood,” Bisignano said.

“You feel that it’s inappropriate to work through the night,” Chelgren said. “You feel that what we’re doing is somehow rushing it through, except that the Senate procedures, the Senate timeline has been followed without exception.”

Chelgren said while Democrats have every right to try to “stall” a final vote on the bill, he and his fellow Republicans have a different tactic.

“We’ve said we’d like to get the work of the people done,” Chelgren said.

The Iowa House debated until just after 10 p.m. Wednesday. This morning, House GOP leaders are proposing a parliamentary move to cut off debate and start voting on amendments to the bill around noon.