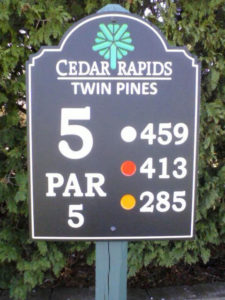 Several Iowa golf courses are open for business and golfers by the hundreds are swarming the fairways. Spring doesn’t officially arrive until March 20th but with unseasonably warm weather in the 60s and near 70, conditions are ideal.

“They’re very excited about the course opening and starting the season basically a good month early,” Miller says. “We probably have only started this early one other time in the last decade. With the spring-type weather, it’s warm enough to really enjoy it and get out there and brush off their game.” The course is running without tee times on a first-come, first-play basis. The driving range is also open. While the so-called greens are predominantly brown, Miller says course conditions are quite good, considering the date on the calendar.

“The grass is dormant but we’re actually going to be mowing greens and eventually, once the frost line comes out, we’ll move cups,” Miller says. “It’s just a basic set-up initially because we never know when we’re going to get another snowstorm — which I would bet we will before we really get going for the season.” While the turf may not be picture perfect, Miller says the golfers don’t seem to mind one bit.

“The dormant grass will help the ball at least sit up a little bit but, obviously, we haven’t gone out and mowed everything and manicured it to what our standards are for in-season,” Miller says. “To start the season in the middle of February is pretty unusual so I think everybody’s pretty tolerant about what the conditions will be.”

If there’s another cold snap that brings frost or snow, the course may close, but otherwise, Miller says they’re open now until next winter.