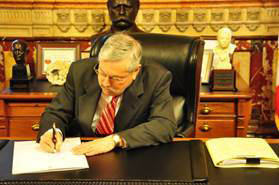 Governor Branstad signed the bill into law today (Friday) and released a statement saying: “These necessary reforms to our antiquated 43 year old public employee collective bargaining law bring fairness for Iowa taxpayers and flexibility to public employees.” He also thanked the legislators who worked on the bill.

The head of the state’s largest employee union, Danny Homan, announced shortly after the bill passed the Senate Thursday, that he will file a lawsuit to try and block it. Homan says it is unconstitutional.

Here’s the full statement from the Governor’s office:

(Photo courtesy of the Governor’s office”)